Climate resilience technology companies in the CRAFT investment portfolio will get a technical boost from the newly launched CRAFT Technical Assistance Facility, bringing critical climate resilience solutions to the people who need them most.

Weather volatility and the physical damage, disruption and resource scarcity that often comes with it, is affecting more and more economies and communities everywhere. While many climate-resilience and adaptation technologies, products, and services can be found in high- and middle-income countries, only a limited number are available to smaller developing countries and vulnerable populations.

In 2017, the investment vehicle, the Lightsmith Resilience Partners, also known as the Climate Resilience and Adaptation Finance and Technology Transfer Facility (CRAFT), became the first of its kind to begin specifically addressing the financing gap in climate resilience and adaptation. NDF was involved with CRAFT from the outset, giving an initial preparatory grant of EUR 0.5 million to help develop its unique strategy, then later becoming the Fund’s first investor with a EUR 8.5 million equity commitment.

“The thesis behind the CRAFT strategy is to invest in promising companies with technologies and solutions that are already developed and already scaling, and in need of financing vehicles to help deliver the benefits to geographies and communities that need them most,” says Tara Guelig, Director of Sustainability and Impact at the Lightsmith Group, which founded and manages the Fund.

“In support of these outcomes, the Technical Assistance (TA) Facility, just launched on 3 June 2022, will focus technical and economic assistance to these companies in the three key areas of: project preparation, de-risking market entry and overcoming barriers to deployment,” Guelig explains.

Although working as a separate and distinct vehicle, the CRAFT TA Facility has been designed to complement the CRAFT Fund in that it will work solely with portfolio companies that the Fund either currently supports or may be seeking to support in the future.

“The advantages of aligning the TA Facility with the CRAFT Fund,” says Isabel Leroux, Program Manager at NDF, “is that the facility can capitalise on the work of the Fund’s investment team in identifying, engaging with, and developing market analyses for the climate resilience companies it supports, and as a result have a substantially larger impact than a non-aligned team could have.”

As the anchor donor, NDF has committed a EUR 1.5 million grant to catalyse and launch the TA Facility.

“Conceptually, climate adaptation continues to be difficult for investors,” Guelig laments, “in terms of how you can measure it and how you can you link it to beneficiaries, while still generating returns.”

NDF’s early support for the Fund was seen as instrumental in crowding in other investors. And now as fundraising begins for the TA Facility, with a USD 20 million goal, Guelig believes NDF’s initial involvement will again help open doors to other interested partners. The US Department of State has already said it intends to support the CRAFT program, subject to the completion of domestic procedures.

How will the TA Facility work?

“Through the TA, we’ll be looking for opportunities to drive impact and deepen the potential beneficiary possibilities of products and solutions in CRAFT portfolio companies,” Guelig says.

Two examples already underway include partnering with WayCool, a sustainable agriculture solution based in Southern India, and a planned pilot in Papua New Guinea with SOURCE Global, a renewable water harvesting panel producer.

SOURCE Global is a very tangible example of the types of companies CRAFT invests in, producing water harvesting panels that can literally suck water from the air and deliver it to water-stressed communities.

It is worth noting that while SOURCE Global has developed and commercialised this innovative technology, the TA project will bring it directly to communities, which are not in the current scope of the company’s commercial and market-driven strategy.

“The aim for the TA project with SOURCE is to design and launch the first pay-per litre water harvesting project, modelled after pay-as-you-go solar mini-grid project,” Guelig explains. That means shifting towards a more community model for the hydro panels, where instead of purchasing them one by one using up-front capital, they would be developed in larger arrays and sold as a service.

Site selection is already underway in Papua New Guinea, and the TA is in discussions with a women-led collective to manage the project and sell the water into the community commercially. In addition to providing a year-round, local source of water, the hydro-panels eliminate the time previously spent fetching water, which is traditionally done by women. Financial literacy and inclusion will also be built into the project, which among many other benefits, will advance local health by replacing contaminated river water with pure and clean water.

“The TA Facility aligns well with NDF’s objectives of targeting the most vulnerable communities and making technologies available to them,” Leroux says, “and the project with SOURCE is a definitive example of this.” 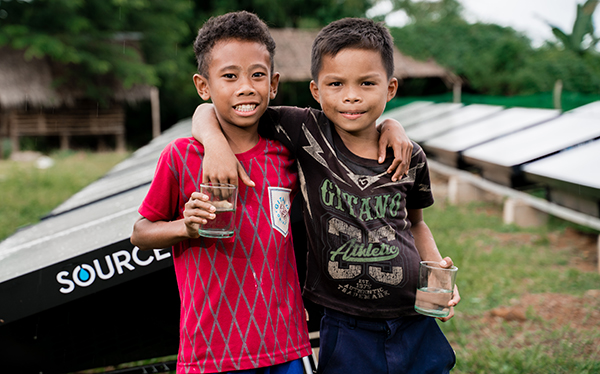 WayCool has been working from a technology platform across the agricultural value chain, from smallholder farmers all the way to family stores, and has already found solutions to streamline the supply chain of agricultural products and decrease the number individual processes. In doing so, they have gained economic efficiencies that translate into higher productivity and farmer income – farmers participating in WayCool’s Outgrow program are reporting an approximate 10% increase in income and a 10-12% increase in farm productivity.

A more efficient supply chain is also helping eliminate food waste. “Around 30% of food in India is wasted,” Guelig says. “But unlike in the West, where we waste it once it’s in our homes, in India, food is wasted once it leaves the farm gates en route to the point of sale.” WayCool’s package of practices includes tools like advanced demand forecasting, so that farmers can harvest their produce when a buyer has been identified, or providing collection centres nearer to farms, which lowers transportation costs as well as reducing waste related to gaps in cold storage.

“At a systems level,” Guelig says, “the TA seeks to expand on WayCool’s successes so far and to quantify the carbon-reduction potential of the agriculture supply chain to demonstrate the range of environmental benefits that can be incorporated in agriculture.”

“The CRAFT Fund was always intended to have an accompanying TA Facility,” says Sanjay Wagle, co-founder of the Lightsmith Group and CRAFT.  “With the Fund, we are finding ways to connect private institutional pools of capital to the climate adaptation problem. And now we have the TA Facility to drive the impact and the global reach of those investments to where they are needed most.”

The Climate Resilience and Adaptation Finance and Technology Transfer Facility (CRAFT) is the first commercial investment vehicle dedicated to expanding globally the availability of technologies and solutions for climate change adaptation and climate resilience.