Catching resilience on the Caribbean coast

In north-eastern Honduras, beyond the snaking rivers and vast jungle of the Río Plátano Biosphere Reserve, lies the far-flung Moskitia Coast. Reachable only by plane or boat, this remote region boasts extraordinary biodiversity, natural beauty, and indigenous communities who have been living off the sea for generations.

Unfortunately, Honduras’ Caribbean coastline is a frontline community in the fight against climate change: more intense and frequent hurricanes, coral reef degradation from ocean acidification, and increased flooding and soil salination. The threats are compounded by overfishing and expansive land development, which deplete valuable fish stocks and destroy natural ecosystems.

The Moskitia Coast, in the Gracias a Dios department, is one of four locations in Northern Honduras where Mipesca, a five-year project, co-financed by NDF in partnership with the Inter-American Development Bank (IDB) and implementing partner, GOAL, operates. The Mipesca project is a multi-pronged effort to build adaptation and resilience on that frontline, supporting artisanal fishing operations, mangrove protection and regeneration efforts, and strengthening natural resource governance.

All hands on deck

Artisanal fishing has long been the lifeline for these coastal communities, providing not only self-sustenance, but income for the entire village. The operation is a truly inclusive effort: three to four times a week boats of up to four people bear the waves in search of lobster, grouper, sea bass, and jellyfish, while another half dozen fishermen and -women are on shore sorting, cleaning, salting, and packaging.

In the Moskitia Coast, Mipesca has installed a field of high efficiency solar panels to provide the power needed for cold storage, ice making, and device charging, enabling businesses to increase production. Across project locations, Mipesca provides technical expertise to strengthen local fishing organisations and promote traceability within the supply chain, a practice which enhances product quality and fetches a higher price at markets further afield. An interim report has shown a resulting 70% increase in sales, corresponding with rise in incomes.

The promotion of adaptation practices which are both sustainable and lucrative incentivizes local fishing organisations to carry out improved resource management and better preserve their blue economy. 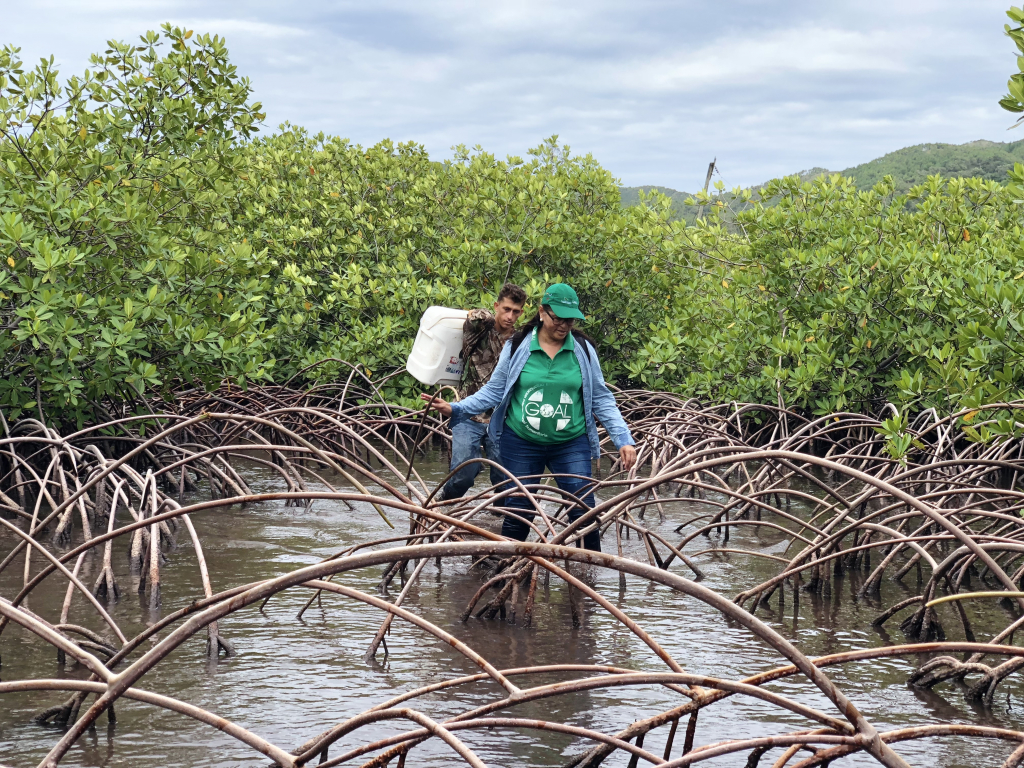 Much of northern Honduras is covered by vast mangrove forests. Despite the enormous role they play in combatting erosion, flooding, pollution, and supporting biodiversity, they’re under threat from the expansion of human activity, ranging from agriculture to tourism. Protecting these ecosystems, and supporting those who are fighting on their behalf, is a central tenet of Mipesca’s work.

“Mangrove forests are recognised worldwide as highly productive systems capable of absorbing carbon from the atmosphere and preserving it for centuries. At the plot level, mangrove forests contain approximately the same amount of carbon per unit as tropical forests” explained Francisco Escalante of the Forest Conservation Institute (ICF).

An important focus of Mipesca’s work is awareness raising, empowering communities to take charge of the governance of their natural resources. Joined by artisanal fishing organisations and ardent environmentalists, the communities on Honduras’ Caribbean coast are developing an impressive grassroots defence against mangrove degradation and the worst effects of climate change.

The project will address mangrove degradation and loss through enhancing the competitiveness of artisanal fishing companies and organizations so as to ensure their sustainable and environmentally responsible inclusion in the economy while preserving the mangrove ecosystem on which their economy depends and increasing their resilience to climate change.